There are open seats on the aisle a little further back. You don't need to stand up in the front. It's not like you are talking to the driver, or anything. Look, you can even get out through the back door. It's not that crowded.
Lady, you are almost as wide as my walker. What makes you think that I can get get around you if you back up towards the driver? No, I feel absolutely no guilt at all for crashing straight into your big feet without saying anything. You're lucky it's just your feet, practically BEGGING me to reach out & smack you.

Okay. Maybe I have the rules wrong. For some reason, I thought that bike or skateboard riding was prohibited on the MAX platforms. That is, no actual using them while seated or standing on them. And I certainly didn't think that I'd have to leap out of the way when this guy who kept approaching me while on his bike would not get off it or stop riding it or even change his path to avoid a collision.

Silly me. I guess being called a "crazy bitch" just because I jumped out of the way for my own safety (and also his, believe it or not) was totally warranted. =P 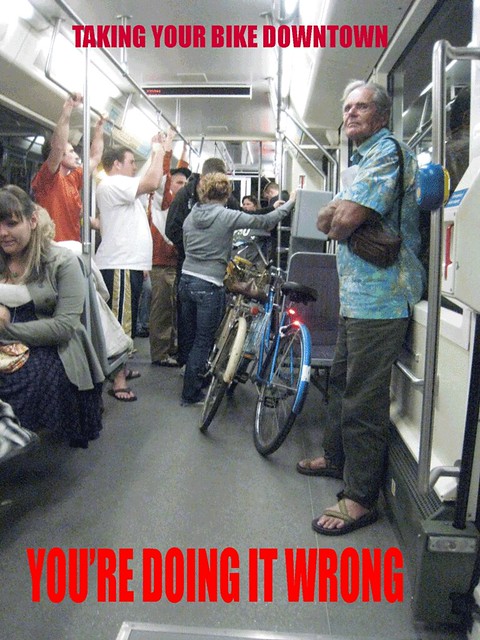 Two pro-tips if you're riding the MAX:

1. If you wait for people to deboard first before you get on, there'll be a lot more room for you to get on and find a seat. If someone is standing right at the door and facing outside when the train stops? Yeah, that's a good indication that they're wanting to deboard and would greatly appreciate it if you stepped aside for them instead of forcing them to squeeze past you.

2. Baby strollers take up a great deal of space and thus aren't appropriate to have sitting unfolded in the narrow aisles. Same goes for those metal shopping "granny" carts. I tripped over one of those today trying to get through the aisle because the cart took up most of the aisle's width.

(I know, I know... the people who most need to read this are the ones least likely to. =P )

The people sitting on the bench moved for me when the driver asked them to. YOU did not. How did you expect me to get around you with my walker? I hate to tell you this, but you do, in fact, have feet. They are big feet. If you really want to pretend that you and your big fat feet are flat, I will be more than happy to oblige you.

I had a jarring incident on the yellow line last night. I was approaching my stop, so I went to stand by my bike on the hook, and a man started yelling at me to get my hands off "his" bike. He repeated this about 10 times in the eternity it took for the train to stop. I just ignored him until the doors opened, and I loudly said "NO, this is MY bicycle, SIR" as I quickly deboarded. I guess that was the right thing to do (he didn't pursue or try to fight me) but I was terrified for a little while there. I am definitely going to sign up for that self-defense refresher course I was thinking about.

Is this a thing now? Potential thieves trying to intimidate people into abandoning their bikes? Anyone else noticed any recent threatening behavior on Trimet, and how it was dealt with? Should I have called the driver immediately instead of ignoring the guy?

I've just about had it with people who eat smelly, noisy food while on the bus. I know the rule against eating on TriMet is there to avoid messes, but I wish it were better enforced because it's nearly impossible to escape the odors from pungent food or the sounds of people crunching chips ten aisles away.

Just a few minutes ago, I had to change my seat because the orange that this lady was eating was so pungent, it made me sick.

Is there a non-wanky, nice way to ask people to at least be more considerate about this? They're breaking a reasonable rule and I'm sick of having to accommodate for it.

This is the message I sent to Trimet:

It probably won't have any effect, but I had to send it anyway.

4. Do not ask anyone else at the bus stop. That's how getting lost happens.

How do people even memorize these things?

If you have a system map, can you even read the damn thing? They make everything SO TINY!

Damn you for only putting stop ID numbers on some of your stops!

Why did Transit Tracker tell me that the bus would not be at my stop for 50 minutes, when it was clearly much less? I was too cold to stand there for 50 minutes & ended up walking, based on your bad information
Collapse